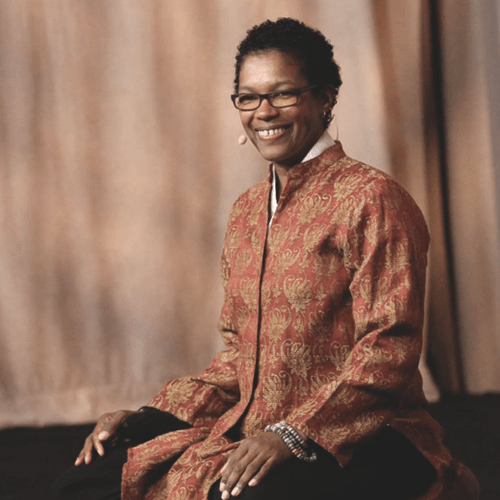 Western Buddhists often practice mindfulness and self-awareness. In this excerpt from Radical Dharma, Rev. angel Kyodo Williams urges us to align our practice with our actions in the world.

A Union of Ideals

By the grace of many Eastern traditions, teachers, and ancestors, white Western dharma communities have at their disposal profoundly liberating teachings and practices that have the power to sever at their very root the destructive behaviors and thought processes that we inherit by way of our birth into human bodies. But we have largely refused to turn the great light of this collective wisdom of mind, body, and spirit onto the social systems that bestow unearned privilege, position, and profit upon certain groups of people. In so doing, we diminish the precious truths we have chosen to steward. We must take a stand.
Movements for Black liberation cast their bodies into resisting the systems and instruments of oppression. Our bodies take the shape of and thus illuminate, the contours of the most insidious force of systematic dehumanization and destruction ever imagined, one which has led the global community into a downward spiral of self-annihilation. Our insistent march exemplifies grace and forbearance that humbles and inspires direct confrontation with the truth, widening the path of justice toward liberation for all people. We are propelled by the essential human compulsion for freedom, but we can also be driven by centuries of pain and carry a burden greater than people should have ever known. Our healing cannot wait until the structures acquiesce, are dismantled, or come undone. We must take a seat. Each community possesses, as Gandhi offered, a piece of the truth—of Dharma. When we seek the embodiment of these truths, giving ourselves permission to be more honest, more healed, more whole, more complete—when we become radical—neither the path of solely inward-looking liberation nor the pursuit of an externalized social liberation prevails; rather a third space, as-yet-unknown, emerges. It is radical dharma. And it is ours. To inhabit radically as an ideal is to commit to going beyond one’s familiar or even chosen terrain. It avails you of what you weren’t willing to see, which is the place Truth resides. To embody that truth is to live beyond the limits of self-reinforcing habits, which take the narrative of the past, project it onto the future, and obscure the present, leaving us to sleepwalk in the dreamscape of other people’s desires and determinations. It is to transcend the borders erected by pain, fear, and apathy, to discover a new territory unbound by the privileges and preferences that trade freedom for familiarity and comfort but pretend they are one and the same. Because by definition it can never be static; to be radical is to constantly live in the territory yet undiscovered, the liberation yet unknown. It wouldn’t be an overstatement to say that the discovery and assertion of Siddhartha Gautama, the historic Buddha—that every human being, irrespective of caste, race, creed, or birth has within them the potential for waking up to the ultimate nature of reality—is one of the most radically life-altering propositions for human life on and in relation to the planet. One that we need right now. Yet, at this time when the Dharma is needed more acutely than ever—a time when our very existence is threatened as a result of our socially embedded greed, hatred, and ignorance—its expansive potential to liberate us from suffering is in danger of being rendered impotent because it is held in subjugation to the very systems of inequity that it must thoroughly examine. Thrust into the Western socioeconomic framework that puts profit above all and coupled with a desire to perpetuate institutional existence at the expense of illuminating reality and revealing deeper truths, the Dharma has become beholden to commodification as de rigueur. Authenticity and integrity are thus compromised. Much of what is being taught is the acceptance of a “kinder, gentler suffering” that does not question the unwholesome roots of systemic suffering and the structures that hold it in place. What is required is a new Dharma, a radical Dharma, that deconstructs rather than amplifies the systems of suffering, that starves rather than fertilizes the soil of conditions that deep roots of societal suffering grow in. A new Dharma is one that insists we investigate not only the unsatisfactoriness of our own minds but also prepares us for the discomfort of confronting the obscurations of the society we are individual expressions of. It recognizes that the delusions of systemic oppression are not solely the domain of the individual. By design, they are seated within and reinforced by society. We must wake up and cut through the not only individual but also the social ego. This is not only our potential, but we now each have it as our collective responsibility. As dharma communities—this includes people belonging to white-led, Western communities of convert Buddhists, but also next-generation yogis, Advaitins, Sikhs, and adopters of other Eastern traditions— we must also do so strategically, and with great haste.

There Is No Neutral

We are at a critical moment in the history of the nation, as well as within the Buddhist teaching and tradition in America. This is the “back of the bus” moment of our time. Fifty years after civil rights laws were laid down, it is clear that they were enshrined within a structure that continues to profit from anti-Black racism. The necessary bias that the system requires in order to be perpetuated has permeated our sanghas—our spiritual communities—and in this very moment, we are called to put aside business as usual. If you have ever wondered how you would have shown up in the face of the challenge put before white America when Rosa Parks refused to give up her seat, upending the accepted social order, now is the time you will find out. For Western-convert Buddhist America, this is the time when we will actually embody our practice and teachings, or not. Our inability as a nation to honor the theft of these lands and the building of wealth, power, and privilege on the countless backs and graves of Black people is our most significant obstacle to being at peace with ourselves, and with the world. The Buddhist community is a mirror image of this deep internal conflict that arises out of persistent resistance to playing its appropriate societal role even as we have available to us rigorous teachings to the contrary. This is a clarifying moment about who we are as individuals but also who we have been thus far as a collective of people laying claim to the teachings of the Buddha, waving the flag of wisdom and compassion all the while. As demographics shift, ushering in increasingly racially diverse pools of seekers, this reluctance promises to be our undoing. We simply cannot engage with either the ills or promises of society if we continue to turn a blind eye to the egregious and willful ignorance that enables us to still not “get it” in so many ways. It is by no means our making, but given the culture, we are emerging from and immersed in, we are responsible. White folks’ particular reluctance to acknowledge impact as a collective while continuing to benefit from the construct of the collective leaves a wound intact without a dressing. The air needed to breathe through forgiveness is smothered. Healing is suspended for all. Truth is necessary for reconciliation. Will we express the promise of and commitment to liberation for all beings, or will we instead continue a hyper-individualized salvation model—the myth of meritocracy—that is the foundation of this country’s untruth?