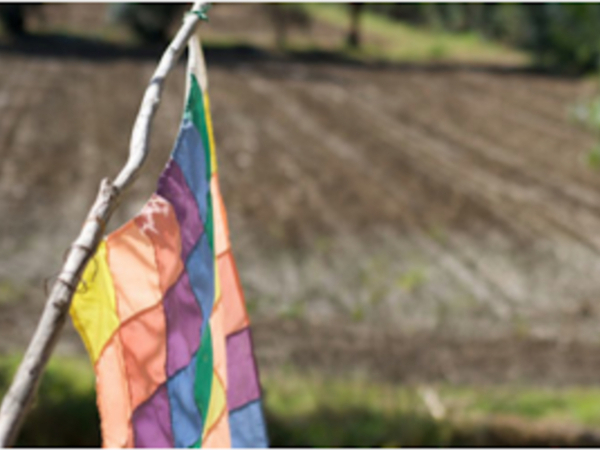 Days after California's Prop 8 was propped up by its Supreme Court, former vice president Dick Cheney unapologetically (of course) and righteously affirmed the novel idea that "freedom means freedom for everyone...people ought to be able to enter into any kind of union they wish." Many of us pulled the lever to cast our vote for an oddly hopeful promise of "a more perfect union" of our Divided States. We watch with our breath held, our hearts in our throats, ready to put our bodies on the line as our One Government lets individual Republics of imaginary divides decide one-by-one, state-by-state, who freedom means freedom for our embodiment of a more perfect union catastrophically undone by an unwillingness to recognize our most precious union: the one of the heart.

In a historic constitutional referendum in Bolivia, the voters expressed their more perfect union through the powerful symbolic act of embracing a second official flag: the formerly illegal flag of the indigenous people and of the social movement that brought down the previous corrupt governments. The seven-color Wiphala flag is arranged in 7x7 colors in a square: Historically, it is the flag of the Incan territory that spanned Bolivia, Peru, Ecuador, Chile, and Argentina. Culturally, it is the flag of the Aymara-Quechua Andean and Amerindian people. Politically, it is pan-indigenous, multi-ethnic, cross-class, and trans-issue. With its similarity to the Gay rainbow flag and use for urban social movements, it is becoming an international symbol for diversity and solidarity, equality and equity, dignity and reciprocity...all coming together. A celebration of the order of cosmos, a symbol of life and fertility, its rainbow covers the spectrum of colors and represents the honoring of all that should matter to a society:

Taken as a whole and liberated from the neo-colonial closet, it represents that more perfect union that we should all strive for in our quest for a fair and equitable society. Some worry that Evo Morales, Bolivia's first indigenous president, maybe inadvertently diminishing the symbol, as savvy politicians have been wont to do, putting a cursory end to movements of the people by absorbing their symbols and slogans into government. Our own Civil Rights Movement came to an abrupt, stunted, and co-opted halt on Lyndon B. Johnson's appropriative declaration that "we shall overcome." But as powerful as symbols, phrases, and slogans are, they only derive their energy from the wellspring of the people they represent.

People that don't just stand in the truth, but express it through the way they live. And just as "words on a parchment would not be enough to deliver slaves from bondage, or provide men and women of every color and creed their full rights" the more perfect union we seek for this country will not arise from a speech, a bailout, or even a healthcare plan. What it will arise from is the embodiment of that more perfect union by folks that know and act on what's right: like the whites and blacks that fraternized in backwoods jook joints, using rhythm to find harmony. From learning how to dance together, they eventually found the ability to pray, sit, and stand together "always at great risk." It will arise from the embodiment of principles in and by the people that show up every day to "narrow the gap" between the hope for our society and "the reality of (our) time." It will arise through the embodiment of actions that manifest the longing held in our hearts, the vision that we cannot yet see, but can feel the truth of in our very core. Thus with great faith, we reach inward, act outward, and move toward it. Our more perfect union will arise from within the people. Some think this union will come as the result of the broad view of Analysis: political, social, grounded. Others believe we'll be brought together by the deep current of Spirit: fundamental, ethical, rooted. In the end, it will express itself as nothing that we currently know of, but rather as a constellation, integration, and distillation of all. It will be individually-particularized, collectively-driven, and universally appealing. It will be a social movement because we are social creatures that can form shapes that express what we wish to become. It will be a cultural movement because together we create the conditions in which new ways can thrive. It will be self-determined and other-honoring. It will be systemic, endemic, and talismanic. More than anything, it will, because it must be transformative. Our more perfect union will be neither this nor that. Leaving nothing and none of us behind, it will be WholeBody: a Third Way that embraces and embodies being fully Human: ever-evolutionary, ever-revolutionary, ever-dynamic, and always Divine. From there, state-by-state and heart-by-heart, in our more perfect union, we can get Dick Cheney's wish granted. Jai Bhim! We shall overcome...Si, se puede. A Better World is Possible. Venceremos...Yes, we can. By any means necessary: Power to the People. Power by the People. Power FROM the People.

Web: Find angel on the Web

Train: Train Your Mind with angel